A downloadable Inner Sea for Windows

Play as a whale swimming the inner sea, Dynamically controlling your movements in a calming and immersive experience.

What is the inner sea?

When Columbus said the world was round he was right, except for one important thing. The earth is no sphere of dirt surrounded by space, but a sphere of space surrounded by dirt! The sun floats in the center of the solar system, as you travel out away from the sun eventually you reach the atmosphere, then further out is the sea, a huge translucent sphere surrounding the sun, further out in the depths of the sea you will reach the ground. Nobody knows whats out there underground, some miners speculate there may be other inner seas!

All controls in the game are bound to mouse input, moving your mouse dynamically effects the whale. Move your mouse up and down to turn in that direction or swim by swishing the tail up and down multiple times build up speed. moving the mouse left or right will allow you to roll in the water to turn.

Game and assets by me, Jazz Cousins, music by Ben Thornton, sea textures from a painting by Tom Cousins.

this is a amazing game but its so hard to control the whale and see where you are going maybe im using a mouse and its not good at but other then that its amazing :)

Glad you enjoyed! And yeah, the controls of the whale were very much an experimental system. Its fun if you master it, but its understandably not worth the time mastering it for most since its a one off quirky mechanic, haha! idk if you remember the very first time you tried a fps game with a mouse, but I bet you spent a lot of time stuck looking at the floor or ceiling, I know I did...

It was awesome tho the flow of the water was beautiful and I know how that feels :)

Downloaded this because my 4yo daughter wanted a game with a whale. The controls do take a bit of practice but after getting proficient I found it very relaxing. Good work!

Thanks! Glad you enjoyed it! Impressed and pleased you mastered the controls too, they did not feels as intuitive as I had hoped, despite their simplicity, been pondering ways to improve that, but not came to anything yet.

If you or your daughter are after any other games where you play as creatures I have a rabbit game, and a cute rolling alien game ;)

id like to see what other games u have

Glad to hear :) you can see all the other games I have up for download on my profile here on itch. If you want to see what I'm working atm on here is my website, the digital page has my game projects on:http://jaspercousins.webflow.io

Wow, thanks for doing the video! And yes I really decided to make this lite experimental kinda game to play with that idea I had for controls. If I decided to expand on this idea at some point I think your right, some plankton to eat would be cool, and maybe those boats you see on the surface could even be whaling boats which would try harpoon you, I would also like to vary the depth of the water far more.

I am kinda surprised how confused everyone gets when they try it, the controls actually work in the same way as most dogfight games, ie you don't stay aligned to a vertical axes but instead have to roll to one side and use vertical input to make a sharp turn, this is kinda confusing, but every other flying game manages it, so I figured it was worth it to give people freedom to do barral-roles through water etc.

Moving the mouse up and down moves the wales tail up and down, this does two things, like in real life the airfoil effect of the tail while its sweeping up and down creates a forward force. The other thing that happens is while your body is curved in a direction you will turn following that curve.

I expected some of that to be confusing to people but a recurring thing everyone keeps doing is turning the opposite way they want to go, I have no idea why this is, the mouse input is set up so that you literally move the mouse the way you want to go, if you veering sharply towards the ground, you need to start moving your mouse away from wherever the ground is! however I think the speed of the whales movements and the fact you have to flap the tail to move throws people somehow which is really interesting. Also, speed is fine, just as long as you know how to drive, I'll upload a video at some point, I think this experement has kindof failed the intuitiveness test but it is one of those unusual things that looks and feels better the more you get your head around the controls I think. 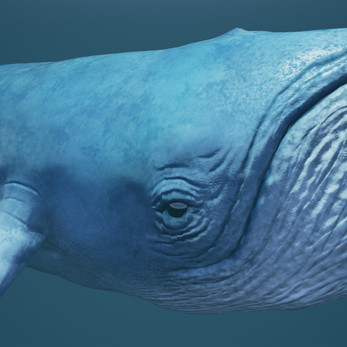 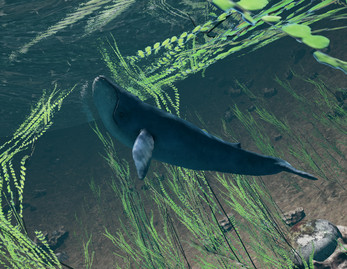 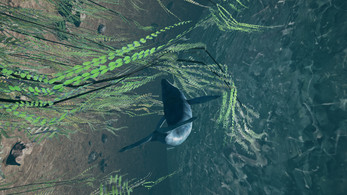 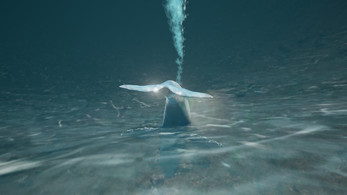 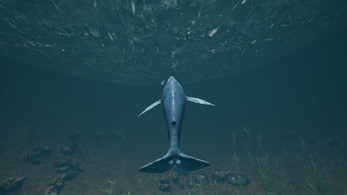 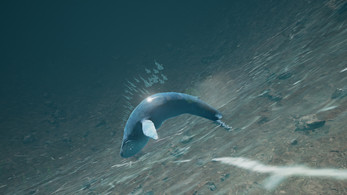